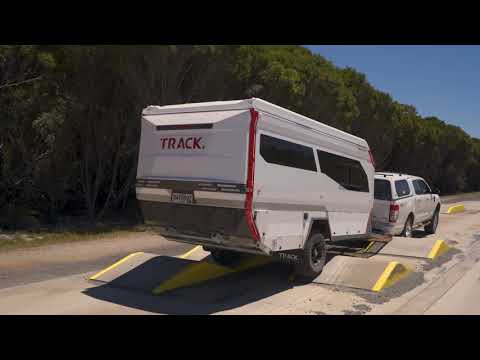 Track has just dropped its first video for the long-awaited T4 Collection of off-road caravans and hybrids. It was shot last year during a test program at the Australian Automotive Research Centre (AARC) state-of-the-art proving ground, where a wide range of vehicle tests take place. While it’s quite common to find the next year’s cars, SUVs, trucks or (hush-hush) military vehicles doing laps, it’s rare to find caravan manufacturers testing their products.

This eye-opening clip showcases the research and development extremes that Track goes to ensure its products stand up to real off-road use – to validate the design choices. Track doesn’t build its unique vans with off-the-shelf components, preferring to design and tune the chassis and suspension to suit the dimensions and weight distribution of each of its RVs. One video sequence, as the Ford Ranger tows the T4 over corrugations, is eye-opening with the jarring difference in suspension activity. The exclusive proprietary MC2-R Asymmetric Link Suspension on the T4 just soaks up the bumps and reacts in marked contrast to the tow vehicle, which has been upgraded with major brand aftermarket suspension.

Track’s marketing manager, Lloyd Waldron, was a little cagey with us but we were able to ascertain that there will be three unique caravans unveiled at the Victorian Caravan, Camping and Touring Supershow, in late February in Melbourne. “We will have a version with an ensuite and one with bunks,” he said, adding that the much-anticipated van would be available with Redarc’s RedVision management system and a broad array of new living options.

Lloyd was also quick to point to the styling of the van, saying that there are no common components between the T4 and the Topaz Series II caravan. “We have started with a clean sheet of paper, as my father would say. It has been a long development, which started more than three years ago with styling and component layout.”

Lloyd elaborated by saying that the T4 Collection featured new integration of custom-made fibreglass components that form the fluid shape of the front nose cone, roof and rear shower POD. He also noted that the fundamentals of an all-metal body and Track-made compressed aluminium walls were still at the core of this project.

Once again, it’s inspiring to see an all-Australian manufacturer investing in design and engineering on a large scale. Of course, so far, we’ve only seen the exterior and the van’s performance in testing; we have no idea of the interior design besides knowing that one layout has an ensuite and one has bunks.

If you want to be among the first to receive the brochures, we have a waiting list..